Udaipur- the city of romance is replete with mesmeric gardens! Saheliyon ki Badi, Wolkem Park, Pandit Deen Dayal Upadhyay Park and Maniklal Verma park at Dudh Talai, etc renders Udaipur the title of garden destination also for decades now.  A breath of fresh air comes in the form of Pratap Park, that has come up at the Pichola Ring Road, at a virgin location on the southern banks of Pichola.  This area is going to be new for everyone in the lake city as well as for tourists and the development of a public park in the area is a positive step in developing the other side of Pichola, which is not very frequented.

Giving onlookers and visitors a not very oft seen view of Udaipur from the denser side of Pichola, the park is equipped with world class standards in form of making it an eco-friendly park complete with Solar Lights, Neem Fertilizers, recycled cement slurry tiles and local stones.  For those who are unfamiliar with the area, there are two roads that lead to it, one is via Mulla Talai, which is a precarious route, replete with narrow lanes, et al, while the other is the more adventurous and easy route from Dudh Talai, through the Jungle Safari route.

The park has been developed in memory of Late Shri Pratap Singh Bhandari, who has been instrumental in developing tourism in Udaipur and surrounding areas.

Pratap Park, situated on the shores of historical Lake Pichola. Built on an area of about 60,000 Square feet, the park comprises of an open gymnasium,  a 250 meter acupressure walking track, gardens with mogra flowering and ample parking.

Giving a delightful feel of patriotism for the city of Udaipur, the “I LOVE UDAIPUR” sign in iron letters with the lovely backdrop of Lake Pichola and the City Palace.

This public – private partnership would enhance tourism by becoming a perfect photo spot and make open spaces for the locals to lead a healthier living.

In the upcoming summer season, this park would easily turn out to be a location of choice for tourists, trekkers as well as locals, who will be pleased to witness the much lovelier view from the banks of Pichola, with the twin seven start hotels, the Lake Palace, City Palace, Jag Mandir and Machla Magra all encompassed in one beautiful panoramic view. 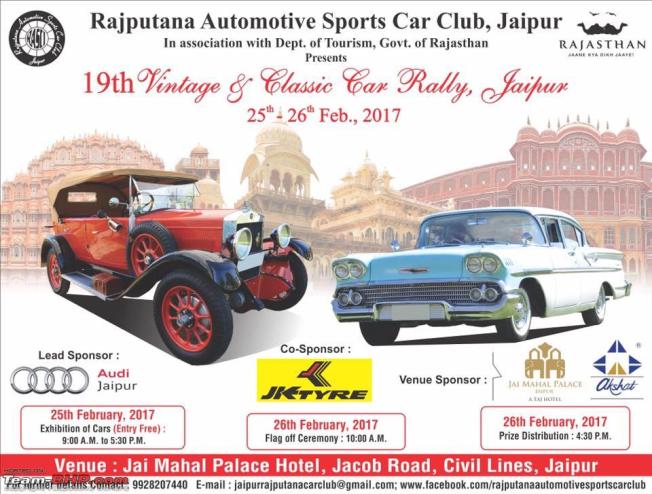 This one’s for those who love to transcend themselves into the past and witness the grandeur of automobile technology of the vintage era .

The love and passion for car rallies make your adrenaline rush, no matter how old you become but just the name of car rally has been enough to create excitement and thrill to those who have a flair for adventure.

The Vintage Car Rally has become an important annual event which is held every year in the capital city of Jaipur having participation of cars that dates back to the very early years of the century. The event brings together a group of leading car owners and vintage car collectors from different parts of the country.

More than a hundred vintage cars will rule the roads of Jaipur tomorrow with the 19th Vintage car rally, which will take place on 25 & 26 February 2017. Hosted by the Rajputana Automotive Sports Car Club, cars of models from 1923 to 1939, and the ones made between 1940 and 1959 will participate from all across Rajasthan, Delhi and Mumbai.

Shiva being one of the 3 gods of the holy trinity of Brahma, Vishnu & Mahesh, Mahashivratri is a big festival in India. Shiva with a crescent on his head, the holy Ganga flowing out of his hair, snake around his neck, a Trishul in one hand and a Damru in the other, flying hair and dancing […]

via The Fervor of Mahashivratri in Jaipur — Jaipur Beat 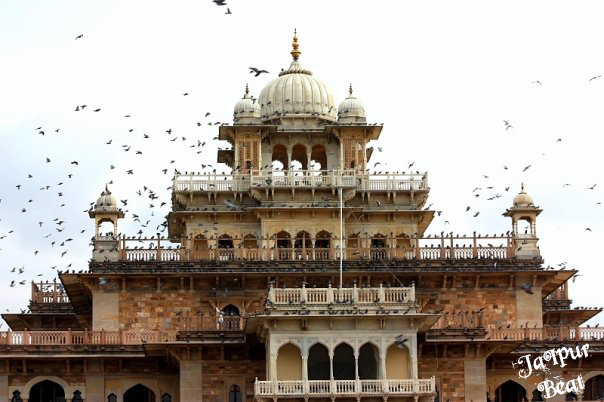 Imagine taking a walk across the most wonderfully designed heritage structures and buildings in Rajasthan, and then chancing upon contemporary art in the form of picture perfect photographs.  That sounds interesting isn’t it?

Well, here’s some good news: this is not just a fraction of your imagination but actually takes place at the Jaipur Photo Event.   So then be its magnificent forts, shimmering lakes,  handsome palaces, compelling historic structures, fascinating markets, colorful people, there are plenty subjects that do not let your camera leave its charm to capture frames, and Jaipur Photo is that event, which will delight your senses and shutterbugs.

Held last year in the month of February, this year again to celebrate our love for the camera, Jaipur is hosting the second edition of Jaipur Photo–  a 10-day festival from 24th February to 5th March 2017. The event will be celebrated across the Pink City such as the Hawa Mahal, Albert Hall Museum and Jawahar kala Kendra. Photographs printed in large formats of national & international photographers will be displayed that will eventually transform the Pink City into a Photographer’s Paradise.

The event witnesses internationally renowned guest curators set up this exceptional display. It is not only a great platform for photography enthusiasts but is also known to propagate contemporary visual culture. These admirable pictures will teleport you into a different world altogether.

Jaipur is a storehouse of exotic flora and fauna, green spaces, surrounding lakes unique wildlife, set to be discovered by any nature lover. As you walk a path that winds pristinely through the boudoir of tranquility and natural beauty, there exists one big avian attraction- ManSagar Lake in Jaipur.

Amidst a curtain of bougainvillea flowers where the golden sun rays filtered from horizon, gives an endless fascination to watch winged wonders; Yes, some migratory, some local, few big and countless small; some in water and multitudes hovering over the lake but all of them will capture your attention to watch the beauties and photograph them.

Every year in the month of February, the glory of Jal Mahal at Mansagar Lake burgeons as the new winged guests make their magnanimous presence. During this time of the year, with an intention to promote bird watching and nature conservation, the Tourism and Wildlife Society of India (TWSI) celebrates ‘Bird Fair’. This year the 20th edition of Indian Birding Fair was held  on 9th & 10th Feb.

The organizer of the British Bird Watching Fair, Dr. Tim Appleton also participated  and around 38 varieties of Birds were sighted during this time.

Don’t miss to look up the aerial ballet that the birds perform while flocking!

It is simply mesmerizing and you can not stop marvelling at the sight of a murmuration! For such are the treats in store here that it’s hard to think of a place that is more rewarding to the seeker of avian travellers.

So, plan a trip to cherish the bounty of nature, take great photographs and simply enjoy!

Rajasthan is one of the favorite destinations for Chandigarhians Every month many tours and trips have been organised to Rajasthan and the trip to the royal city never end without visiting the pink city ‘Jaipur’.

As of now, a flight of Jet airways takes off from Chandigarh to Jaipur with 1 stop in Delhi and it takes a minimum time of 2.50 hours to reach Jaipur.

Benefits of this flight

Till now, people commute by bus, trains or own vehicle to reach Jaipur from Chandigarh. Or if someone travel by air to Jaipur from the city, then the passenger have to halt in Delhi and then reach Jaipur.

Udaipur World Music Festival is a three day event which brings together more than 150 artists from across sixteen countries including United Kingdom, Italy, South Africa, Senegal, Canada, Armenia, Turkey, Macedonia, Mozambique, Norway, Iran, Cuba, Switzerland and India among other nations to multiple venues across the city of Udaipur.

The festival featuring a diverse mix of music from different continents and regions coming together in one of the best Tourist destinations of India turns Udaipur into a much more culturally vibrant destination during these three days. It is an annual event where International and domestic travelers flock to Udaipur to witness the magic of music.

The first day of the festival, this year will take off from Gandhi Ground where Iranian American Singer Azam Ali will introduce us to the spiritual world of Electro Sufi World Music with her music partner Niyaz and the very famous Kailash Kher & Kailasa will croon Sufi numbers. For an international spin, the collective of musicians from Mozambique, Norway, Sweden and Zimbabwe—Monoswezi—will hypnotise the crowd with their fresh spin of traditional African songs.

On the second day, Fateh Sagar Paal lake of Udaipur will echo with the magical poetic renditions of Ablaye Cissoko from Senegal who will collaborate with the Constantinople Ensemble from Canada for the first time in India. Music lovers will also witness band Kabir Café celebrating the great Saint Kabir’s writings. In the evening, Gandhi Ground will come alive with smashing rock numbers of Indian band Parvaaz and South African World Music band Hot Water. The day will conclude with a high-energy performance by Bangalore based folk/fusion band, Swarathma.

The third and final day will be one filled with a lot of novelty like trance and gospel music which seldom come on a big platform like this. The day will commence at Fateh Sagar Paal with Brazilian songs, Afro-Cuban rhythms and Jazz renditions of the vivacious Swiss-Cuban musician Yilian Canizares. The festival will end in the evening at Gandhi Ground with three performances—Italian band Officina Zoe will introduce you to the world of trance with the Trance Therapy Music of Taranta; guitarist and composer Dhruv Ghanekar’s new project Dhruv Voyage will join force with some of the exciting musicians in the country and London Community Gospel Choir will give the festival a fitting spiritual finale.