The largest fair of Bikaner, in India’s desert state of Rajasthan, the Kolayat Fair combines a huge cattle fair with a pilgrimage to the town’s holy lake. It’s quite a spectacle as buffaloes, camels, horses and cattle are traded, and pilgrims bathe and float clay lanterns in the lake.

Tourists also experience a great time as the fair is celebrated on an expansive scale between the month of October and November. The fair is also known as ‘Kapil Muni Fair’which is scheduled to start from 17th November to 26thNovember, 2012. The folklore of the fair is not the only attraction in fact it also has a great religious significance. It is believed that a holy dip can provide them respite from all the sins they have done. The historical significance of the fair also lures a large number of tourists. There are several temples near the lake and the most famous one is dedicated to the sage Kapil Muni. It is believed that a day’s stay at Kolayat is equivalent of spending 10 years at any other holy sacred place.

On Kartik Purnima, Deep Malika is performed in the evening where devotees float clay lamps in the sacred lake as part of the ritual. The thousand of diyas (clay lamps) floating in the lake is just a mesmerizing sight to behold.  This evening in Bikaner is beautifully filled with the holy chanting and divine rituals that gives a magnificent experience to the tourists and visitors.

It’s that time of the year again when Rajasthan celebrates one fair after another with traditional pomp, gaiety and gay abandon. The department of tourism along with the district administration will organize the fairs and festivals both for foreign and domestic tourists during the festive season. These fairs become fun time for the tourists with folk performances, ceremonial processions, deep daans, art and crafts and ethnic cuisines at the food court among others. A recent example being Jahan-e-Khusrau, held last weekend at Central Park, Jaipur!!

This month itself, the Pink City is celebrating the plethora of entertaining festivals and events. Minister of tourism Bina Kak had recently declared that the Diwali festival should, over a period of time, become as well known as the Dusshera of Kota or the Cattle Fair of Pushkar. The department has resolved to leave no stone unturned in making this festival synonymous with the city of Jaipur. One will see folk performances in different parts of the Walled City as well as lighting at the Jal Mahal Ki Paal.

We look forward to a fun filled Diwali  in Jaipur .

The Pushkar Camel Fair is one of the largest in India and the only one of its kind in the entire world. During the fair, Lakhs of people from rural India flock to Pushkar, along with camel and cattle for several days of livestock trading, horse dealing, pilgrimage and religious festival.

An astonishing 50,000 camels converge on the tiny desert town of Pushkar, in India’s state of Rajasthan, for the annual Pushkar Fair. It’s a fascinating and peculiar sight, and a great opportunity to witness an old traditional style Indian festival.

The original intention behind the Pushkar Camel Fair was to attract local camel and cattle traders to do business during the holy Kartik Purnima festival, held in Pushkar around the full moon in the Hindu lunar month of Kartika. The fair has now also become a major tourist attraction. 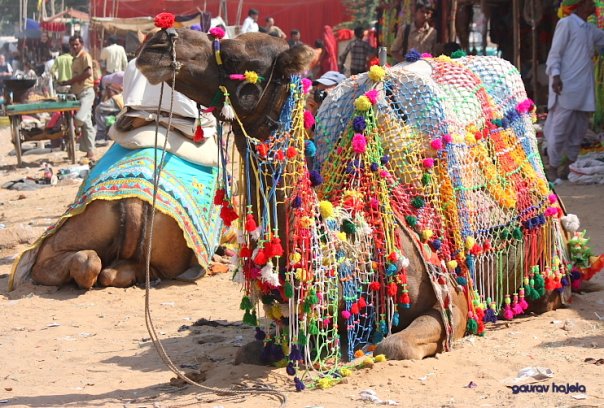 Pushkar, this small town of Rajasthan, becomes a cultural phenomenon when colorfully dressed devotees, musicians, acrobats, folk dancers, traders, comedians, ‘sadhus’ monks and tourists reach here during Pushkar fair.. The camel and cattle trading is at its peak during the first half of festival period. During the later half, religious activities dominate the scenario. Devotees take dips in the holy “Sarovar” lake, as the sacred water is known to bestow salvation.

This small town is transformed into a spectacular fair ground, as rows of make shift stalls display an entire range of objects of art to daily utility stuff. Decoration items for cattle, camel and women, everything is sold together. Small handicraft items are the best bargain for buying souvenirs. The camel and horse races have crowds to cheer. Camel judging competitions are quite popular with animal lovers. Each evening brings different folk dances and music of Rajasthan, performers delivering live shows to the roaring and applauding crowds.

Pushkar fair has its own magic and it’s a lifetime experience for travelers. It has featured in numbers of travel shows, films and magazines.

Starting from the November20 to 28, 2012, the Pushkar camel Fair is truly a feast for the eyes. If you are any where within striking distance at the time, it’s an event not to be missed.

Polo ! The very name conjures vision of aristocracy and excellence, of style and rare athletic prowess. Polo is a game that signifies power, adventure, beauty, elegance, graceful team work, class and above all – Tradition. Among the world’s most ancient sports, Polo is not less than a religion in Rajasthan. For a game, that is as “Exclusive as Elusive”, Jaipur is a natural home of polo, in Rajasthan.

Believed to be originated in China and Persia nearly two thousand years back Horse Polo has become the most fascinating sport of the elites of Rajasthan.  Polo is such an amazing sport that it not only excites the player but also the spectators, even if they know a little bit about the game. Horse Polo is a glamorous sport and has drawn international attention to India.

The Mughals were responsible for bringing the game from Persia to the East. Emperor Babur established the game of Polo in India. In the 1850s, British tea planters discovered the game in Manipur. 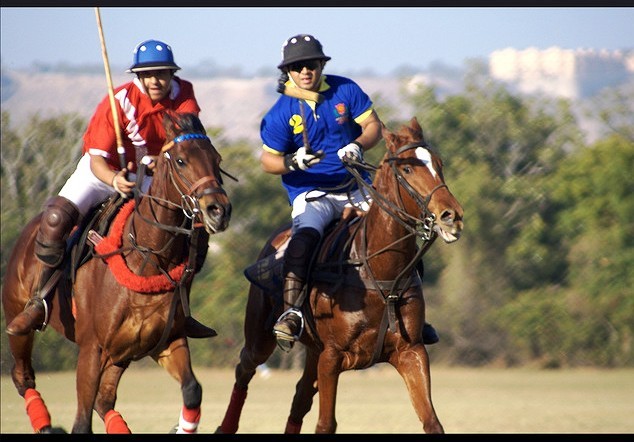 Rajputs being keen equestrians made the game their own during the Mughal period and even gave it several twists. In 1889, the Minister of Jodhpur Sir Partap Singh invited the Bengal Lancers to raise the Jodhpur Lancers; thus Polo was introduced to Jodhpur in its current form. The various Polo teams of Rajasthan have won numerous accolades and there have been several Polo players who have gained international acclaim.

Since the days of Emperor Akbar it has been the Indian Maharajas that have given this game its Royal Tradition. The history of Polo in Indian is full of proud achievements. Rajasthan is famous for its immortal legends of patriotism, sacrifice and glorious traditions of valour. Since 1887, this fascinating game has been greatly influenced by the traditions of Rajasthan. It is a matter of pride that most of the high handicap players produced in India have been from Rajasthan.

Since then Polo has become a part of the royal heritage of Rajasthan. While the 61st Cavalry also based in Jaipur, has kept it alive in the army.  Here, the game is not just played on horses; there is camel polo, elephant polo and even bicycle Polo! 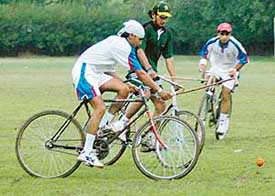 As time passed, the polo scene has changed but Jodhpur still leads the way and is considered to be a perfect destination for Polo. The Polo Season starts every year in winter in the month of December which lasts till mid April in different parts of India.

The Chandrabhaga Fair is held every year at Jhalrapatan in Jhalawar district of Rajasthan, in the month of Kartik. The fair, held on the last day of Kartik, attract devotees who bathe in the holy water at the spot, known as Chandravati, which is considered as a holy river by the people residing there. The festival is named after this river is considered very sacred by the people.

The huge Cattle Fair which combines religion with commerce is going to be held from November 27 to 29, 2012. Farm animals like cows, horses, buffaloes, camels and bullocks are brought here from the distant parts for sale. Traders from different parts of Madhya-Pradesh and Maharashtra converge and brisk trading takes place. The fair gives a very good opportunity to the tourists to know more about the rituals, traditions and also about the people of this region.

Diwali, the festival of lights, is the most popular of all the festivals from South Asia. It is an occasion for celebrations by Hindus as well as Jains and Sikhs. It marks the beginning of the Hindu New Year according to the Lunar Calendar. It celebrates the victory of goodness over evil, light over darkness and ushers in the New Year. On this festival people clean their houses and wear new clothes.

Diwali is a 5 days festival as Dhanteras, Choti Diwali, Badi (Main) Diwali, Padwa and Bhaiduj. There are many different names for the days of Diwali in different regions of India. During Diwali people pray to Lakshmi, Goddess of wealth, light, prosperity and wisdom, and also worship Lord Ganesha, the ‘Remover of Obstacles’, the ‘Lord of Beginnings’.

On the first day of the Diwali festival people pray and eat a special breakfast made of many different foods. Dipa Lights (also called Diwali Diyas, candles, Ghee Lamps, Parvati Ganesha Lamps) that are made of clay, fueled with Oil or Ghee (clarified butter), the wick made of cotton wool, are placed outside of houses, on floors and doorways.

During Diwali festival doorways are hung with torans of mango leaves and marigolds. On the day of Diwali, in the evening people wear best of their clothes, exchange gifts, burst crackers and make merry with their family friends and relatives.

The beautiful roads of Udaipur will soon witness a new attraction, both for tourists and locals, in the form of an open-roof, fully equipped Double-Decker Bus service ‘Udaipur Darshan’.

As the name suggests, Udaipur-Darshan will be touring around all the top tourist spots in the city. Exploring Udaipur from sitting in a cozy, open roof of Double Decker bus will surely give a varied experience.

Besides its comfortable face-to-face seating arrangements, the air-conditioned bus also has all basic facilities including a television screen, mobile phone charger, a small pantry, large size glass windows for a better view of outside etc.

The bus is not officially launched yet, so the fare and route map are still to be known. But, if sources to be believed, there would be two rounds per day and the bus will be covering more than 12 tourists spots. Also, the charges are expected to be around Rs. 500-600 per head.

Double-Decker Buses are quite common in various places, especially in Mumbai where double-decker buses are used as a local transportation and in Jaipur there are many similar services for tourists. The boosting tourism sector of Udaipur will certainly revolutionize with this new concept.

Udaipur-Darshan looks as an attractive giant-on-wheel promising to serve the great hospitality, Mewar is always known for.